The Left has been pulling an intellectual bait and switch on the American public.

Since the 1960's the public has been promised social harmony if the United States became a color-blind society. Now in 2016 we suddenly find we've been faked-out by the elites. The pointing finger: "YOU are to blame" that we haven't achieved in all parameters strict equality-- which was never the idea of America in the first place. What the American dream offered was simple opportunity-- the opportunity of a free and open country.

We're now supposed to be the opposite of a color-blind society. Everything is difference and differentiation. The Left wants us dividing ourselves in as many ways possible. They call it identity politics.

This might be what the elites want. Some of them thrive on the thought of a racist society. Without it, they'd lose their reason-for-being.

Or, the academic Left has embraced the concept of America as a racist society. If such a society doesn't exist, they'll create it.

"The Ballad of Paul Ryan" 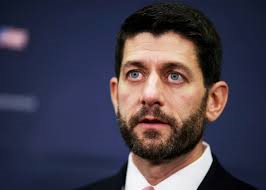 Hedging his bets
Expressing his doubts
To show you his fairness
He's ready to shout!

"Don't force me to choose
between Donald and Hillary,
I was placed here to prove
my impartiality!

Dems and Repubs,
Repubs and Dems,.
Why am I unable to
choose between 'em?

You say I was put
in my House chair so lofty?
By those who're leading
or controlling the party?

I admit that yes,
of course this is true.
I wait to be told by the big boys
just what to do!

Preibus and Perry,
Jindal and Huck,
Have already caved
to the inevitable Trump.

Not to back Trump at this stage
would be quite the sin.
Thus I dance and I sway
and I twist in the wind.

So what do I do?
What do I say?
I'm pushed by my puppetmasters
every which way!

Support Donald Trump?
Bill Kristol says NO!
If I do Mitt Romney
says I should go.

Exactly how perplexing this is
has been shown.
For someone like me
with no mind of his own!

If I knew what to do,
you know I'd be lying."
Such is the dilemma
of being Paul Ryan.

If you like the writing, pick up the freshly-updated new ebook,
Trump and the Populist Revolt
available for only $2.99 via Kindle or Nook Books.
Posted by Karl Wenclas at 9:08 AM No comments: 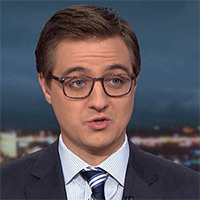 AN EXCERPT FROM TRUMP AND THE POPULIST REVOLT

The success of Donald Trump signifies an American public able to see past the puppet show. They see through commentators telling them what they should think and how they should feel about the candidates.

Trump's appeal remains a mystery to the talking head elites. Because millions of voters like Trump, while they see him as an outsized monster, they assume those millions must not be very intelligent-- and they believe they themselves are. Forget that the millions, by voting for Trump, are acting in their own interest, and so are behaving quite intelligently.

East coast media people are almost entirely the creation of elite universities. Their "intelligence"/schooling exists within narrow lines. Their experience of the world is limited. They know what they've been taught. They've made their way through their competitive schools by always giving the "right" answer. Regurgitating back to the professor the professor's own beliefs. It's a complete form of indoctrination. The higher up the educational ladder the individuals progress, the more the completeness.

These individuals see the world through the prism of set talking points.

For instance: Most of them are confirmed atheists. To them, all religions are interchangeable. Especially the three monotheistic religions: Judaism; Christianity; Islam. Because they've never studied one of them in depth-- or made an honest attempt to understand the religion via its own viewpoint-- they know only the talking point.

To them, these religions are permeated by extreme "fundamentalists" who all behave in the same way. That the fundamental root of Christianity is Jesus, a man of peace, and of Islam, Mohammed, a conquering warrior, never occurs to media people. That philosophies of these religions are very different never enters the heads of media people. They see religionists of all stripes as equally dangerous. They see stereotypes.

Once in the work world, the Manhattan or D.C. office, the professor has been replaced by the herd: the approval of their colleagues and peers, but it's the same thing.

Once Trump was labeled as "racist" by one of their number, the rest of them had to fall into line, or be suspected of being closet populists or unintelligent boobs or something. The label becomes permanently fixed in their brains. When they see the word "Trump" on a page, or hear the word on radio or TV, they see the word "racist" at the same time.

As I said, it's a complete and continuing indoctrination into the media herd mentality.


Trump and the Populist Revolt can be ordered via Kindle Store or Nook Books, or through app for either. Only $2.99.


Posted by Karl Wenclas at 3:37 PM No comments: 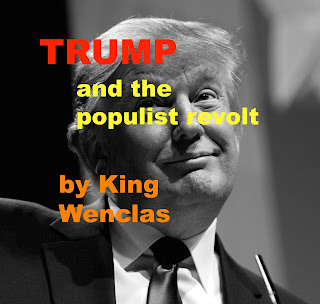 Trump and the Populist Revolt is now available, at both

An excerpt, from a chapter called "The Star":

In the HyperMedia Age, the President is akin to a front man of an organization. The spokesperson for a product. The quarterback "face" of a football franchise. The value of that stock or product or franchise depends heavily on that face. On the so-called "top guy." The President represents the brand "America." The strength of his-or-her persona brings with it subliminal benefits.

America has had "stars" as President before. Strong, dynamic figures-- beginning with the first President, George Washington. Washington wasn't by any means the smartest or sharpest of the Founding Fathers. What he had was presence and bearing. He looked great on a horse. He looked like a leader-- and so gave the weak, fledgling nation instant credibility on the world stage.

Other Presidential stars have included Franklin Roosevelt, John Kennedy, and Ronald Reagan. There may never have been quite the star, however, as Donald Trump could be.

For starters, he was already a huge media figure before he began his campaign. He's carefully crafted his persona to exude simplicity combined with strength. He's shown he's a take-no-shit kind of guy. The American public instinctively likes this. The rest of the world respects this.

Posted by Karl Wenclas at 10:04 AM No comments:

(An excerpt from the upcoming e-book, Trump and the Populist Revolt.)
****

Few expected Donald Trump to fare so well. Probably not even The Donald himself planned on this level of support-- he was likely merely doing a little brand boosting. But his unfiltered statements reflected a public mood. His campaign quickly caught on.

In hindsight, Trump's success isn't completely surprising. His campaign marks the introduction of advanced marketing techniques into the creaky world of politics. When Trump said of his opponents-- and of politicians and government-foundation bureaucrats in general-- "These are very stupid people," he was right. The not-so-bright political mandarins have spent hundreds of millions of dollars trying to defeat Trump. He's run a streamlined campaign with a small staff, fueled by free media.

Donald Trump realized you can bypass the rules of the game by ignoring them. The way to the top proved to be not via meticulously-created, strategy-crafted expensively top-heavy political machines full of experts and armies of paid party loyalists. Trump found a shortcut. He demonstrated the importance of story and the primacy of mass media.

Contention? Controversy? Nonstop outrageous statements? This kept the "Trump" name-- already a renowned brand-- in front of, well, everybody living outside a cave. No individual has ever so dominated social media, particularly twitter. Trump did it not with a planned-out strategy a la the Obama campaign in 2008, but as a natural happening.

Donald Trump is a master buzz creator. To find his like you'd have to go back to Brian Epstein of England, in 1963. Trump set off sparks that turned into a nuclear chain reaction. Buzz feeding on itself. The infection of publicity.

Maybe Donald Trump would be a terrible President. Maybe not. What he's proved to be is the all-time best at generating publicity.

The hope, if he IS elected, is that he puts his genius for business and PR to the service of his country. Brand America. If it happens, it will be a wild ride. A substantial portion of the American public are willing to take that ride. For many Americans, life is on a downtrend. The national stagnation has become unfulfilling. If there's a chance for America to become "great again"; for us to experience renewed American prosperity, many citizens are willing to wager on that opportunity.

Posted by Karl Wenclas at 6:19 AM No comments:

(Excerpt from the upcoming ebook, Trump and the Populist Revolt. This is taken from the "Anti-Trump" section which looks at the enemies of the Donald Trump candidacy.)
***

All establishment media conservative and liberal have become hysterical over the rise of Trump. One of the most hysterical has to be the Huffington Post website. They put a disclaimer about Donald Trump after every Trump article they post-- as if he's a comic book supervillain:

That Huffington puts this after every Donald Trump article-- they run articles about him several times a week-- makes them like an ancient Roman Senator who ended his every speech with the phrase, "Carthage must be destroyed!"

It's a robotic thing to do-- a sign of people who've stopped thinking. The statement's an ideological shortcut which affirms their rigid view of reality. It allows them not to think. More than this, it tells their readers not to think.

They may as well be honest and give the shortened version:

"Trump must be destroyed!" 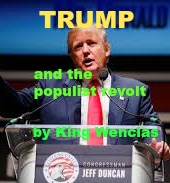 Hello! I'm bringing back this blog to begin spreading the word about a new e-book I'm writing, called TRUMP AND THE POPULIST REVOLT. Release date sometime in mid-to-late April. In the book I'll be studying the Donald Trump phenomenon from all angles and every possible viewpoint. Stay tuned to this blog for updates. Thanks!
Posted by Karl Wenclas at 8:10 AM No comments:

Karl Wenclas
Karl Wenclas is a renowned cultural insurgent and populist arts promoter. He believes in art and politics from the ground-up. Under the "King Wenclas" name, he's the proprietor of American Pop Lit, producer of exciting ebook fiction. Art and lit are nothing if they're not dramatic and fun.